“Love Wi-Fi 6, but you should keep Wi-Fi 5, too,” seems the message Asus wants to remind everyone. The networking vendor today showcased at CES 2020 multiple products that bridge the two Wi-Fi generations.

Details of these products are still incomplete right now, but you can expect to buy at least a few of them this year.

The most notable is the new ZenWiFi product line that encompasses both Wi-Fi standards and includes two mesh solutions and a smart speaker.

The ZenWiFi AX WiFi system includes two identical Wi-Fi 6 routers pre-programmed to work together in a mesh to deliver up to 5500ft² (510 m²) of coverage. You can pick either to work in the role of a router, and the other will automatically function as a satellite to extend the coverage.

Update: The full review of the ZenWiFi AX XT8 is now available here.

Each is an AX6600 tri-band router that dedicates its 4×4 (4804Mbps) 5GHz bands as a backhaul. As a result, the system can deliver multi-gig Wi-Fi speeds to Wi-Fi 6 clients. Like most Wi-Fi 6 routers, the ZenWiFi AX features MU-MIMO and OFDMA for optimal Wi-Fi speeds.

Other than that, the ZenWiFi AX has a complete set of features as most Asus routers, including AiProtection Pro. Powered by Trend Micro, AiProtection protects the entire network from online threats free of charge for the product’s lifetime.

Physically, each XT8 router is a compact standing box, with all its ports — 4 Gigabit LANs, one Gigabit WANs, and one 2.5Gbps multi-gig port — located on the back. It’s available in white or graphite black.

The ZenWiFi AX (XT8) system will be available in the first quarter of 2020. It’s unclear how much it will cost.

The CT8 is the Wi-Fi 5 version of the XT8 above. It shares the same design, color options and also includes two units. In fact, from the front, you can hardly tell the CT8 and the XT8 apart.

Update: The full review of the ZenWiFi AC is now available.

On the inside, though, each CT8 is an AC3000 tri-band Wi-Fi 5 router. Again, in a mesh setup, the router will dedicate one of its two 5GHz as the backhaul to deliver the best performance in a wireless configuration.

Like the XT8, the CT8 shares the same web user interface, mobile app, and feature sets as most Asus routers. It also supports AiMesh and can work with an existing Aimesh router as a node.

The ZenWiFi AC (CT8) will also ship in the first quarter of this year.

As a standalone router, the ZenWiFi Voice is stylish, looking like a white ball. It features dual-band AC1300 Wi-Fi 5 and sports a quad-core CPU. On the back, it has one Gigabit Ethernet WAN port, three Gigabit Ethernet LAN ports, and one USB 3.2 Gen 1 port.

The ZenWiFi voice shares the same features as other Asus routers, including AiProtection Pro. The ZenWiFi Voice router will ship sometime this year.

Also showcased at the show is the RT-AX86U, which is the Wi-Fi 6 version of the popular RT-AC86U. This new router looks the same as its older cousin but now features a Wi-Fi bandwidth of up to 5700Mbps.

On top of that, the RT-AX86U has a 2.5Gbps multi-gig port that can work either as a LAN or WAN port. This port allows it to support a faster-than-gigabit connection.

Update: The full review of the RT-AX89X is now available.

And finally, there’s the RT-AX89X router, which has a unique jellyfish design. Among other things, the RT-AX89X is the first home router that features multiple multi-gig network ports, including a few 10Gbps ports.

More details of the RT-AX86U and the RT-AX89X, including their pricing and availability, will be available in the coming months. 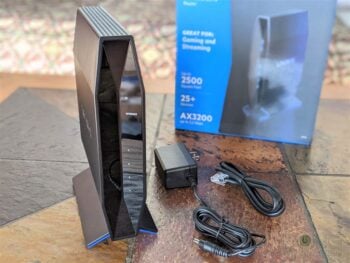 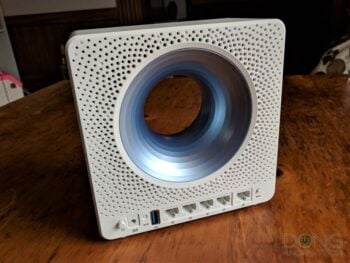 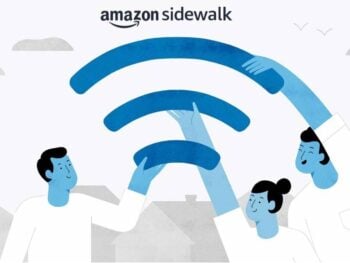 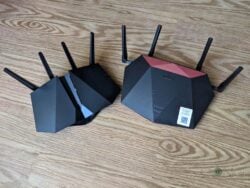 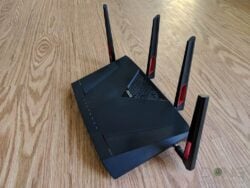 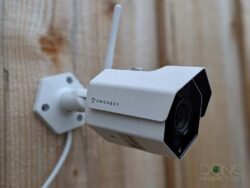