The UniFi AP BeaconHD Wi-Fi MeshPoint (model UDM-B) — a.k.a. BeaconHD or UniFi Dream Machine Beacon — from Ubiquiti, is either an excellent mesh add-on unit or a frustrating one, depending on how many wall sockets and what type you have around your home.

In any case, if you already have the UniFi Dream Machine (UDM) and now move to a larger home, the Beacon can be a viable option to build a robust mesh in a snap. Where its physical design works out, the mesh point is worth the current cost of around $130.

Note: This post only makes sense if you have read my review of the UniFi Dream Machine. 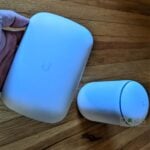 Out of the box, the UDM Beacon looks like an elongated top of the Dream Machine. It’s a rounded rectangle with a big logo of Ubiquiti on top. Its rim doubles as a color-changing status light, just like the case of the UDM.

This light responds each time you want to apply changes to the Beacon’s setting. You can also use it to locate the device, or as a night light for a room when applicable — it’s quite bright and lovely. And just like the case of the UDM, you can manage the Beacon’s light via the  UniFi mobile app.

The way it works, you have the Dream Machine router working at a corner, then place the Beacon in at a distance, and the two will form a mesh Wi-Fi network.

On the underside of the Beacon, you’ll find an integrated three-prong plug. Snap it into a socket, and you’ve finished the hardware setup. The device fits snuggly. It’s super-fast and convenient.

But the reality can be a bit more complicated.

Thoughtless plug design, too large for its own good

That’s because the Beacon is way too bulky. Measuring 6.68-inch (169.7 mm) tall and 4.42-inch (112.5 mm) wide, the add-on mesh point will cover the entire surface of a multi-outlet. That, plus the fact it has no pass-through socket, means wherever you use it, you can’t expect to plug anything else into the power.

That’s if you can plug it in at all. That’s right. You can’t just plug the Beacon into any wall socket. Its prongs don’t stick out from a flush surface but a groove that’s about a quarter of an inch deep and half an inch narrower than the unit itself, in anticipation of a faceplate’s protruding top.

As a result, you can only plug it into a single socket or a two-outlet wall faceplate. If you have a 3-outlet or a larger one, the Beacon’s plug is too short for the device to get juiced up or stay put.

Consequently, it’s also very awkward when used on a power strip. You will need to plug it into a socket at the end of the trip for it to stay put and get connected. Even then, the Beacon will probably still hog the entire power strip for itself.

Also, in this case, you don’t want to leave it on the floor — you’ll trip over it, plus that’s not good for the Wi-Fi signal. But if you hang it up, the whole thing is an eyesore.

I had a hard time finding the right place to leave the BeaconHD during my testing, and sorely missed the compact design of the AmpliFi HD’s mesh point.

As the name suggests, the UniFi Dream Machine BeaconHD aims to be an add-on mesh point specifically for the Dream Machine router. However, as part of Ubiquiti’s UniFi hardware product line, it will work with any UniFi controller.

For the same token, it will not work with an AmpliFi router, like the AmpliFi HD mentioned above. And the Beacon doesn’t work with any third-party router.

At the core, the UniFi AP BeaconHD Wi-Fi MeshPoint is a 4×4 Wi-Fi 5 extender with the top speeds on the 5GHz of 1733 Mbps. It’s a dual-band device, so there’s no dedicated backhaul. As a result, at best, a client will get just 867 Mbps out of it due to signal loss.

It’s always tricky to find that sweet spot to place a wireless mesh point, especially one without a dedicated backhaul band. Too close, and you don’t have the coverage you want. Too far, well, there’s not much signal from the router for the device to extend.

In the case of the UDM BeaconHD, things were much harder. You have to be quite lucky to have an available and suitable wall socket at the perfect spot.

But that’s the only issue with the Beason. Once you have found a place for it, the rest is a no-brainer.

The setup process is super easy. Just plug it in a few feet from the Dream Machine router, and run the UniFi mobile app. Within a few seconds, you’ll see the AP BeaconHD appear on the Device tab as “Pending Adoption.”

Now, tap on it, and the system will add it to the Deam Machine’s UniFi controller. The whole process took me less than a few minutes. After that, I could change the name of the Beacon and use the mobile app to manage it, including viewing connected clients and a host of other geeky information.

By the way, while the setup was easy, I did notice some minor oddities. The mobile app doesn’t allow for firmware updates. For that, you’ll need to use the web interface of the Dream Machine. The Beacon worked much better with the latest firmware, so much sure you do that right away.

Once everything is up and running, just like any other mesh system, clients connected to the Beacon will enjoy all the settings and features of the Dream Machine itself. Among other things, that means the mesh has much more to offer than an AmpliFi HD set.

I stacked the UniFi AP BeaconHD Wi-Fi MeshPoint up against satellite units of other Wi-Fi 5 mesh system, and it did very well for a dual-band broadcaster. 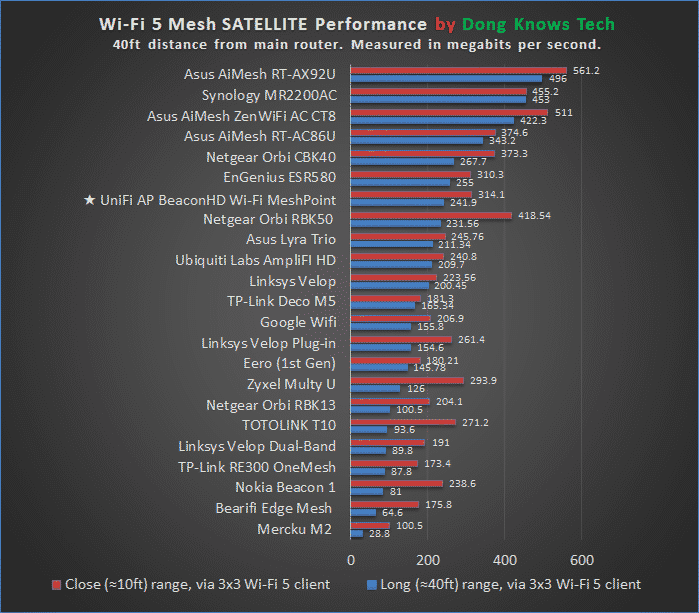 It was hard for me to test the coverage of the Dream Machine + BeaconHD combo mesh, due to the issue with the plug. However, it’s safe to say the two can handle some 4000 ft² (372 m²) quite easily, or even more, as long as you can find an excellent place for the Beacon in.

I tested the system for some 10 days and had no problems at all. There was no disconnection and the connection was consistently fast enough to deliver 100 Mbps or faster Internet speed throughout my home.

The UniFi AP BeaconHD Wi-Fi MeshPoint is a nitch mesh point. It only works with an existing UniFi controller, especially the UniFi Dream Machine router. Technically this is a remarkable and convenient add-on mesh unit.

Design-wise, though, you first need to have a suitable dedicated wall socket waiting for it, which can be an issue for most homes. Keep that in mind before getting yours.