You walk around the house and, at times, can see the Wi-Fi signal strength bars on your device move up or down. If you ever wonder what changes when you lose a bar or gain one, this post is for you.

You’ll learn about how dBm is used to indicate power level and gauge Wi-Fi signal strength. In most cases, this is for your information only. There’s not much you can do about the signals other than moving your device or the Wi-Fi broadcaster around.

However, in some cases, knowing how to adjust the dBm-based triggers in a mesh system can help with roaming or signal hand-off. The whole thing can be a bit confusing until you’re through with this post.

Dong’s note: I initially published this post on August 22, 2021, and updated it on December 4. 2021 to add more relevant information.

In the realm of Wi-Fi, dBm is used to indicate two things: The power level of a broadcaster and the signal strength at the receiving end.

But before that, what is dBm exactly? This is where things get interesting (or boring, depending on how much you want to know) — we first need to understand what dB is.

A bit of warning: The next part can be a bit technical.

dB is short for decibel, or one-tenth (1/10) of a bel (B), and is a measurement unit commonly used to convey:

dB is helpful because it allows signal (power) gains and losses, which can involve large scales, to be calculated by adding or subtracting whole numbers instead of decimals or a convoluted formula.

dB is a form of scientific notation for electronic power levels and signals. It allows us to convey very large numbers in a few characters.

What’s most important to keep in mind about dB is that it’s not linear but logarithmical — it’s curvy. Higher dB always means “more,” but the value is not consistently incremental. In other words, the “gain” from 1 dB to 2 dB might not be the same from 5 dB to 6 dB.

In most cases, dB is used with something else. Popular examples are dBi and dBm.

dBi explained: Why there’s no gain in Wi-Fi antennas

dBm is short for decibel (relative to a) milliwatt. In other words, it’s a logarithmical way to convey power level or signal strength.

When used to convey power level, 0 dBm is defined as 1 mW (milliWatt). That’s how much is put into an output device such as an antenna or what you can see in a power meter.

The formula is quite geeky and complicated, but generally, each time we double (or halve) the power level, we add (or subtract) 3dBm.

And I picked 30 dBm for a reason. Per FCC regulations, that’s the maximum power a home Wi-Fi broadcaster (router or access point) can have.

In other words, in the US, each Wi-Fi band can deliver no more than 1 watt of broadcasting power. And that varies from one region to another.

In the US, the 30 dBm (1 watt) max broadcasting power applies to all existing Wi-Fi standards, up to Wi-Fi 6 and Wi-Fi 6E. That’s the highest in the world — the allowed Wi-Fi power levels in the EU and Japan are 20 dBm and 10 dBm, respectively.

Newer Wi-Fi standards, such as Wi-Fi 7, might have a new level of allowed broadcasting power.

This power level is not to be confused with hardware power consumption — electricity — which depends more on the processing power (CPU, RAM, Flash) and other hardware components — USB ports, network ports, PoE features, etc.

Some broadcasters allow users to adjust Wi-Fi broadcasting power. In this case, the maximum level is the top allowed by the region.

This inconsistency in allowed power levels around the globe means a broadcaster (router) made for one region might not function (similarly) in another.

It’s also the reason you seldom see its actual broadcasting power level revealed on its label — that’s supposed to vary depending on where you use it.

However, it’s generally safe to assume that your Wi-Fi hardware uses the highest broadcasting power level allowed for the current locale.

On the receiving end, signal strength is generally understood as the signal sensitivity at the receiver. In this case, there are a few things you should keep in mind about the dBm value:

Generally, meaningful dBm values on the receiving end range from -10 (strongest signals) to -90 (weakest). The farther you’re from the emitter (broadcaster) the weaker the signals get — this distance defines its range.

Here are the general dBm readouts for Wi-Fi and might or might not apply to other wireless communication methods such as cellular:

Still, the numbers’ significance varies slightly depending on the environment and hardware. Like all things in Wi-Fi, these are not rigid values — expect nuances.

When a Wi-Fi device connects to a broadcaster, it does so at a specific dBm value, which constantly changes in real-time, depending on the environment and the distance.

Depending on the application, this value is called differently, but the most popular name is the received signal strength indicator or RSSI.

The easiest way to know a device’s received Wi-Fi signal strength is to use a Wi-Fi analyzer or Wi-Fi finder app.

Run the app, and it can visualize the dBm values according to how strong the signals are at your current location in real time, as you can see in the screenshot above.

If you’re on a Mac, there’s another easy way to figure out the machine’s current received Wi-Fi signal strength:

Click on the Wi-Fi icon while holding down the Option key. Now you’ll see the Wi-Fi signal strength shown as the RSSI value.

When you can (and should) change the dBm value

Generally, you can’t manually change the dBm value. That’s because it’s what your Wi-Fi client gets at a certain distance from the broadcaster. It is what it is. To change it, you have to move your device around physically.

However, when you use multiple broadcasters, i.e., a mesh Wi-Fi system, changing the dBm value might help devices roam seamlessly.

In this case, you change the dBm values of the triggers. In other words, you enter the target dBm number at which something will happen.

Specifically, when you have multiple broadcasters in a home and want your Wi-Fi device in your hand, like a phone, to automatically connect to the nearest host instead of the one farther away, adjusting the dBm triggers on the broadcasters might help.

By the way, this is generally called seamless hand-off, which is always a tricky business.

Not all mesh systems allow you to change the dBm triggers — at most, you can only turn the seamless hand-off on or off.

One of the systems I know that give you this option is Asus’s AiMesh, and I’ll use it as an example.

In this case, you can adjust the dBm value of the Roaming assistant setting for each frequency band (2.4GHz, 5GHz, or 6GHz). And even then, it’s a bit finicky.

That’s because, depending on the environment, a router picks a dBm value that works best with the seamless hand-off.

Consequently, you might find this number different from one router to another or one location to another. However, you can use the default value as the base.

Speaking of default, the number you’ll likely see is -70 dBm, the “sweet spot” threshold where the signal is still around 60%.

At this level, a client would disconnect itself from the current node when the signal strength gets around 2 bars, and it detects another node with a stronger signal nearby. It then connects itself to the closer node.

So, if you want the hand-off to take place at a higher threshold (like 3 bars), increase the dBm value a few points from the base (-67 dBm or so). Now, your phone won’t wait till the signal gets as low as two bars before it jumps.

If you change it to an even higher value (like -60 dBm), the hand-off might happen too frequently, which can be a bad thing, especially when you stay right in the middle of two nodes.

That’s because each jump takes a bit of time for the client to re-authenticate with the new node. Hence, too many jumps close to one another can cause interruption.

On the other hand, if you change the value to lower than -70, the hand-off might not happen at all, and your phone remains connected to a node until there’s no signal from it.

Some Wi-Fi mesh systems use the connection speed as the base for the hand-off.

Specifically, a client would consider jumping from one broadcaster to another when the speed between it and the current one is lower than a particular number.

This threshold tends to be quite low, like 50Mbps, because a client generally doesn’t need more than that. In any case, this is the reason why you might see your devices are more clingy to a far mesh node.

Again, most of the time, knowing the current dBm on your device is just for your information. Maybe so that you can adjust your device’s or your Wi-Fi broadcaster’s position.

In some cases, changing the dBm-based trigger can help with roaming in a mesh setup. But even then, keep in mind that Wi-Fi can be unpredictable and doesn’t always work as to how we perceive the physical world.

That’s because, with Wi-Fi, we literally get what we don’t see. So don’t expect it to behave the way you see things. Most of the time, this is a matter of trial and error. 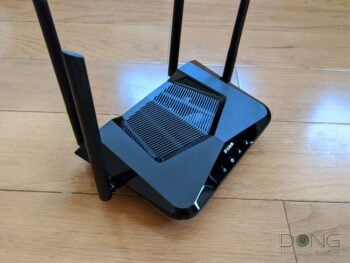 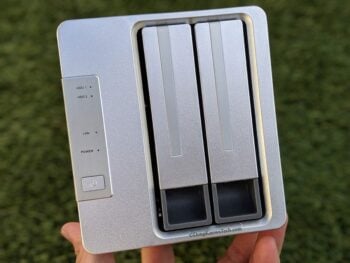 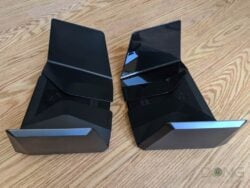 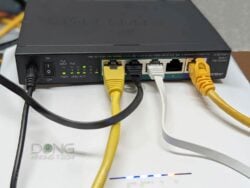 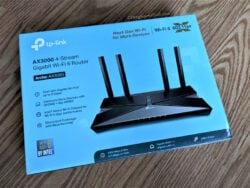