Despite the relatively low cost, the RAX40 has an eye-catching design and respectable performance. What’s more, it, for the most part, has the same set of features and network settings as the much more expensive RAX120.

But you do get what you pay for — the RAX40 has no multi-gig network port. Also, featuring a mid-tier Wi-Fi 6 and relatively week processing power, it doesn’t give you a ton of bragging rights. The Wi-Fi range is comparatively modest, too.

For the cost, though, the Netgear Nighthawk RAX40 still an excellent choice for those living in a small home who want to upgrade to Wi-Fi 6 right now. 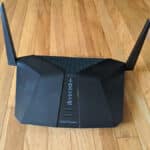 Netgear RAX40: The muted version of the RAX120

Quite literally, design-wise, the RAX40 is the stripped-down version of the RAX120. Take the latter and chop off its antenna “wings,” and you’ll get yourself the former.

That said, the RAX40 is significantly more compact than the RAX120, though, it’s not exactly petite, compared with other routers. It sure is bulkier than the TP-Link AX3000.

The RAX40 has two permanently attached antennas on each of its sides, toward the back. You can swivel these around to adjust the coverage, or to keep the router less bulky.

On the back, you’ll find the four usual Gigabit LAN port and one Gigabit WAN port. There’s no multi-gig port, so the fastest speed you can expect from the router is 1Gbps. There’s also a USB 3.2 Gen 1 (5Gbps) port to host a storage device.

Now, to deliver the top negotiated speed of 2.4Gbps, the router needs to use the 160 MHz channel width, and it does, something you won’t find in more expensive routers, like the AmpliFi Alien or even the Netgear RBR850.

Considering we only have 2×2 Wi-Fi 6 clients on the market, the Netgear RAX40, like the case of the TP-Link AX3000, fits in the sweet spot of Wi-Fi 6, where you get the best bang out of your buck — you won’t get more than 2.4Gbps even if you have a more capable Wi-Fi router.

Netgear doesn’t want to disclose the RAX40’s processing power, saying that the router features a “dual-core processor.” But it’s safe to assume that the router’s hardware is modest compared to the RAX120, or the RAX200. Still, it should have enough power to serve a typical household’s networking needs.

The Netgear RAX40 has the same setup process as that of other recent Netgear routers. It has a web user interface that you can reach by pointing a browser on a connected computer to 192.168.1.1 (or routerlogin.com).

The first time you do it, you’ll meet the initial setup wizard that walks you through the whole process step by step. So setting up the RAX40 is similar to that of any router with a web interface.

Alternatively, you can also use the Netgear Nighthawk mobile app. In this case, though, you’ll need to sign in with a Netgear account before you can do anything. In return, the app allows for managing the network remotely, without you having to configure a Dynamic DNS service.

Personally, though, I prefer the web interface. At the very least, I won’t need to surrender any personal information to Netgear. And it took me just about 10 minutes to get the RAX40 up and running, including the time to upgrade to the latest firmware.

The same set of settings and features

The RAX40 has the same web user interface as most Netgear router released in the past five or so years.

The interface offers a decent amount of network settings, enough for most users to configure a home network to their liking. It also includes a good set of features, including Dynamic DNS, port forwarding, IP reservation, and VPN.

The router’s USB port can only host a storage device  — cellular dongles or printers need not apply. Plug a portable drive into this port, and you can now share the storage space not only with those within the local network but also over the Internet, via Netgear’s well-known ReadySHARE applications. There’s no support for Time Machine backup, however.

As for Wi-Fi settings, the RAX40 is the same as most Netgear routers. There’s not much to configure.

You have the option to make each of its two bands to work at an “up to” speed, namely 2400 Mbps and 600 Mbps on the 5GHz and 2.4GHz, respectively. The setting is a bit redundant since there’s no reason why you shouldn’t pick the highest numbers.

Other than that, you can only pick which channel each band will work on (or auto) and the Wi-Fi power for each band, ranging from 25% to 100%. Again, I don’t see why you shouldn’t select the highest numbers here, either.

I tested the RAX40 the same way I do other Wi-Fi 6 router, and it met my expectations.

I used 2×2 Wi-Fi 6 clients (there are no faster ones) and top Wi-Fi 5 clients for the testing. In all, the router’s performance reflected the 2×2 specs of both Wi-Fi standards.

It’s worth noting that my Wi-Fi 6 test clients’ negotiated speeds fluctuated quite a bit, ranging from 1Gbps to 2.4Gbps, even when I left them at the same spot. It seemed, though, that didn’t affect the sustained throughputs. 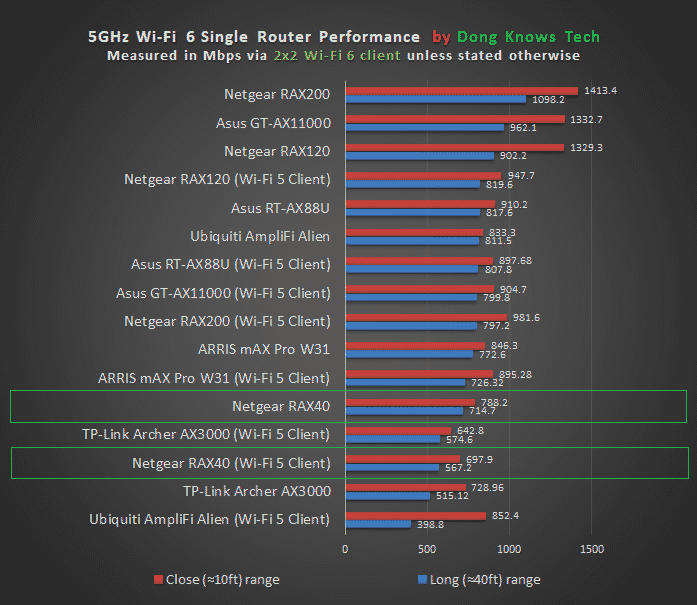 With Wi-Fi 5 clients, the RAX40 did quite well, too, registering almost 700 Mbps and 574 Mbps at close and long ranges, respectively. 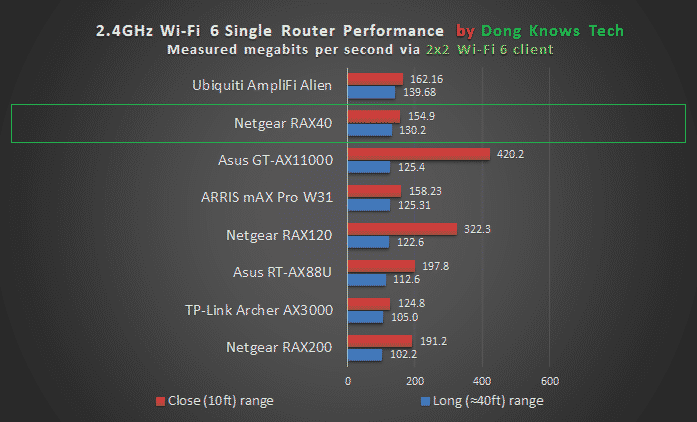 On the 2.4GHz, the router delivers nowhere close to the 600 Mbps Netgear claims. It averaged about 155 Mbps and 130 Mbps at close and long distances, respectively. Those were quite good for any routers, however.

The RAX40’s Wi-Fi coverage is about the same as that of the TP-Link AX3000 — not too impressive. On the 5GHz band, for example, I started to notice my client no longer connected at full bars starting just some 45 feet (14 m) away, with the line of sight.

The 2.4GHz had better range, but the speed became so slow — and it was never fast as shown on the chart above — that you shouldn’t count on it.

In all, if you have a house of fewer than 2000 ft without a lot of walls, the RAX40 can probably handle it. But you sure should only get it for a small home.

To make up for that, the Netgear RAX40 proved to be reliable in my testing. I passed my 3-day stress test with no issue at all.

The tested the RAX40’s network-attached storage feature with the SanDisk Extreme Portable SSD. Via a Gigabit connection, the router had the sustained copy speed of 28 MB/s and 41 MB/s for writing and reading, respectively. 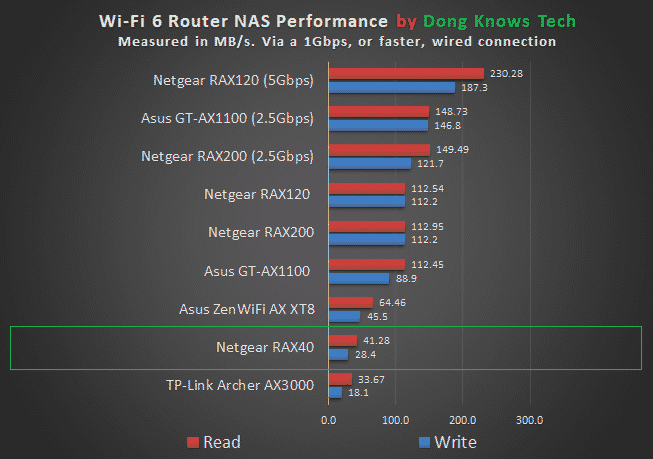 These weren’t in any way the best I’ve seen but consistently better than that of the TP-Link AX3000. Without a LAN multi-gig port, the router can’t compete with other Wi-Fi 6 routers on this front.

Nonetheless, if you want to do casual storage sharing, the RAX40 will get the job done. Anything more than that, you’d need to get a dedicated NAS server.

The Netgear RAX40 Nighthawk AX4 4-Stream Wi-Fi 6 router is an excellent choice for those living in a small home. The aesthetically pleasant hardware, good Wi-Fi speeds, and reliable coverage make the router worth its relatively low cost.

Most importantly, for now, since there’s no faster client on the market, your Wi-Fi speeds won’t get any better even if you invest in a more expensive, highly capable Wi-Fi 6 router.

If you’re wondering which to get between the RAX40 and the TP-Link AX3000, check out my Wi-Fi 6 routers compared post.