You cannot copy content of this page
Home Reviews Synology DS620slim Review: It’s Not the Size that Matters

Small but potent, the newly-released Synology DS620slim is my type of NAS server. You know, the Asian type.

Stereotyping aside, this server is an all-new offering from Synology, in terms of design. Maybe that’s why it’s a 620 and not 619 per Synology standard naming convention. One thing for sure, it’s significantly superior to the DS419slim that came out last month.

Here’s the deal: If you have plenty of room, a larger server like the DS1019+ or even the DS1618+ makes more sense. But if you’re looking for an advanced NAS server that’s also silent and doesn’t take up a lot of space, at $450 (disk-less), the DS620slim is an excellent buy.

Despite being part of Synology’s compact series, the DS620slim has very little in common with the DS419slim, other than the fact it also uses 2.5-inch drives.

On the outside, the new server looks more like a miniature version of the DS1618+ with six front-facing drive bays, each with a drive tray. Each tray has a lock to keep it in place, and the server includes two keys. The lock is to prevent accidental drive pullout, and not for security. It’s the same lock used in other Synology servers, and you can open it with a small plyer if you misplace the keys.

Unlike the DS1618+, which is entirely tool-free, the DS620slim requires a screwdriver for drive installation. That’s not a huge deal and quite understandable — 2.5-inch drives are just too small to secure with a latch. Furthermore, Synology includes a small bag of screws for the job.

On the inside, the DS620slim is a clone of the DS218+, with the same hardware specs. It runs an Intel Celeron J3355 dual-core CPU with 2GB of stock system memory. You can also add another 4GB to bring the total to 6GB. For that, you need to open its underside to get to the RAM slots.

Unlike the DS218+, the DS620slim has two Gigabit LAN ports, and you can link them up to have a 2Gbps connection. In return, it doesn’t have an eSATA port to host an expansion unit. But that’s the point — adding an extension unit will defeat the server’s intention of being a compact and quiet machine.

The DS620slim shares the same standard setup process as other Synology servers with these simple steps. It took me about half an hour to get mine ready, including the time to take the server out of the box.

Moving from the DS419+, I had a pleasant surprise to find out that the DS620slim sports high-end features that were never before available to Synology’s slim series.

For one, the server supports the new Btrfs file system. As a result, you can use Snapshot and Replication to guard data against accidental or malicious alteration, including ransomware. The server also supports 4K transcoding, and its Surveillance Station can handle up to 25 IP cameras.

What’s more, it’s the first slim sever to have Synology’s Virtual Machine Manager. VMM is a powerful app that allows the server to run multiple virtual machines — be it a Windows, Linux, or another DSM system — on the inside. With this capability, the server has endless potential in what you can do with it.

And finally, like all Synology servers, the DS620slim comes with more than hundreds of other add-on apps accessible via its Package Center. In all, it has all that makes Synology NAS so great and fun to use; and more.

Before the DS620slim, I’ve used all slim servers from Synology, from the DS409slim to the DS419slim. They all have one big issue: Too little RAM, fixed at 256MB or 512MB, and a modest amount of storage space due to the nature of 2.5-inch drives. So, slim servers have been generally considered as “toys,” suiting only those with basic needs.

The DS620slim bucks that trend by hosting two additional drives, upping the current cap storage space to 24TB — or 20TB protected via SHR (or RAID 5). This capacity, which will increase when 2.5-inch drives of larger than 4TB are available, is now comparable to many servers of larger physical sizes. What’s more, the DS620slim is a perfect fit for those wanting to use the 2.5-inch solid-state drives (SSDs), which would require adapters to work with a regular-size server.

That said, want a hardcore NAS machine? Populate the DS620slim with six 4TB Seagate IronWolf 110 SSDs and upgrade its RAM to 6GB. You’ll now have a system with plenty of storage space that will beat most other servers in performance. And it’s still compact and light enough for you to carry it with you.

I used the DS620slim for a couple of weeks, and it grew on me. The server proved to be reliable, fast, and super quiet. It did everything I’d expected from my much larger DS1618+.

I tested the DS620slim with two 240GB SSD (as cache), and four 1TB 7200 rpm hard drives and it did well in all tests. The server registered the sustained writing and reading speed of some 113 MB/s — about the cap sustained speed of a Gigabit connection, after overheads. 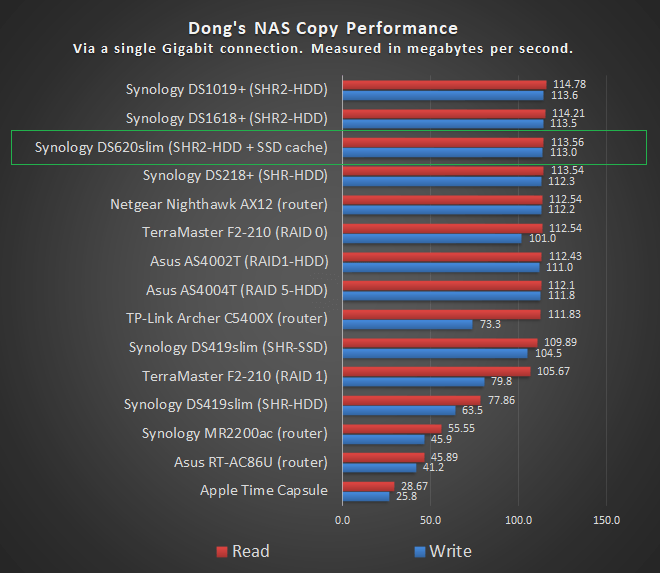 Even with the 2GB of stock memory, the DS620slim’s interface was extremely responsive. The server could also run multiple tasks — hosting storage space, downloading files, streaming content, and recording footage of four IP cameras — at the same time, with no problem.

One thing, though, if you intend to use VMM with it, make sure you upgrade its RAM to the max. That’s because generally, you need to dedicate at least two GB of RAM to a virtual machine and the server needs that much for its own.

Overall, the DS620slim is a pleasure to use. It’s by far the best among Synology’s slim servers in terms of performance. 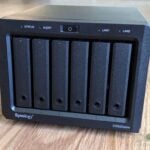 With a powerful CPU, up to 6GB of RAM and six drive bays, the DS620slim is the first compact server that truly rivals any full-size NAS systems in performance, storage space, and features. The fact it’s super quiet doesn’t hurt, either. If you’re space-conscious, I recommend it. It’s an excellent little storage machine for a home or a small office.

Keep in mind that due to its compact physical size, the DS620slim does have some drawbacks. It has no PCIe add-on slot to host a faster network adapter, nor does it have built-in M.2 slots to host extra SSD for caching. Also, it can’t handle more than 6GB of RAM, and at $450 (disk-less), it’s quite pricey when you factor in the storage cost.