Indeed, the networking vendor made all kinds of buzz about the new standard in early 2021 with nothing to show during the entire year. And then, it recommitted the Wi-Fi 6E promise in early 2022.

And now, when the world is getting excited about Wi-Fi 7, the XE75 is here.

So, the new Wi-Fi solution is late to the game — it’s the 6th Wi-Fi 6E mesh on the market so far — but you already knew that if you had read my reviews on the rest of them (save the no-good eero Pro 6e).

Consequently, you might find this review a bit predictable. My mantra has been how Tri-band Wi-Fi 6E is generally not a great idea for a fully wireless environment but is excellent for a wired home. And that applies in this case, too.

So let’s cut to the chase: If you want a reliable wireless mesh system with relatively modest sub-Gigabit performance, at the suggested retail price of just $299.99 for a 2-pack, the XE75 is a great, if not the best to date, Wi-Fi 6E deal. It’s the most affordable by far.

On the other hand, if you buy into the marketing that tends to pick (the speed of the 6GHz band) and choose (the range of the 2.4GHz band), you’ll be utterly disappointed.

Despite the support for Wi-Fi 6E, the Deco XE75 is very similar to previous deco sets, including the X60 and X5700. If you have used a Deco set before, you’ll feel right at home with this one.

The review XE75 is a 2-pack system that includes two identical mesh routers. Out of the box, the two are pre-synced, you only need to set up one as the main router, and the other will automatically become a satellite unit once plugged into power.

Afterward, you can manually add more mesh units to the system to extend the coverage. That’s generally how a mesh system works anyway.

On the front, toward the bottom, it has a little indicator status light. And on the back, there are three auto-sensing Gigabit network ports — each can work as a WAN (available only in the unit working as the router) or a LAN port depending on what you plug into it.

There’s no Multi-Gig port which is a big disappointment. And there’s no USB port either.

You must use the Deco mobile app for the setup process. And during this time, the phone (or tablet) must connect to the Internet via a cellular connection or an existing Wi-Fi.

But other than that, the setup process proved smooth in my trial. The app’s setup wizard covered all necessary steps in great detail, and I got the system up and running within less than 10 minutes without a hitch.

If you’ve used a mobile app before and can pay some attention, you’ll likely also find this a walk in the park.

After the setup, the app allows for managing the system from anywhere globally, as long as you have Internet access on your phone.

This interface has a simple network map that shows connected clients. And then, there’s an Advanced page with the system’s status, log, and low-level functions, including manual firmware updates, time-zone configurations, and a few WAN settings.

It’s worth noting that this web interface is only available after the initial app-based hardware setup. And there’s no way you can use just the web interface to manage the Deco XE75. You can’t use it to change any important essential settings of a home Wi-Fi network.

So the Deco app is the only way to use the mesh system, and all that implies.

The XE75 shares the same features set as the previous Deco set. It comes with the support for Dynamic DNS — in this case, it only supports TP-Link’s free domain –, IP reservation, and port-forwarding. There’s also a simple QoS engine where you can add individual devices to the priority list.

On top of that, there’s a light version of HomeShield that include simple basic Network Protection and Parent Controls. If you subscribe for HomeShield Pro — as the app will often nag you –, which costs $6/month or $55/year, you’ll get the more in-depth version of the two.

There’s not much you can do about Wi-Fi settings other than creating a network name (SSID) and password.

After that, you can turn the radio of the 2.4GHz or 5GHz band on or off, effectively making the network 5GHz- or 2.4GHz-only.

As for the 6GHz, it gets interesting: By default, this band is set as the dedicated backhaul for the mesh system. But you can also make it available for clients, too.

When you choose to use the 6GHz as a dedicated backhaul, you only make this band unavailable to clients — and the system will still use its other two bands (2.4GHz or 5GHz) as backhaul when necessary.

And that is necessary in most cases since the 6GHz band’s range is very short.

When I placed the satellite unit behind a wall in my testing, the mesh immediately stopped using the 6GHz band as backhaul. I figured that out via testing — there was no way to know which band was working as backhaul via the app.

That said, there’s no point in using the 6GHz as the dedicated backhaul unless:

When you open the 6GHz band to the client, it’ll be able as a separate network name (SSID), though you can name it the same as the other two bands.

Like all applicable Deco sets, the XE75 support wired backhaul, which is also what I’d recommend for best performance.

In my testing, the Deco XE75 did well for its hardware specs. I tested it both as a single router and a wireless mesh system.

Since it doesn’t have a Multi-Gig port, its sustained speed is generally capped below Gigabit. And compared to other Wi-Fi 6E broadcasters, it did quite well, as you can see on the chart below.

As a mesh system, I placed the satellite unit 40 feet away from the router unit within a line of sight. The numbers below are generally the best-case scenario, presumably when the 6GHz band was working as the backhaul — chances are you’ll get a lesser experience.

(Again, there was no way to know which band the system was using for its backhaul at any given time.)

I did try the system via wired backhaul, and in that case, the satellite unit delivered similar sustained rates as the router units.

In real-world additional anecdotal testing, the Deco XE75’s performance generally topped at around 300Mbps at the satellite unit and close to 900Mbps at the router unit. Of course, the actual numbers fluctuated a great deal.

Typically, you’ll have placed the two quite far from each other, or have a wall or two in between them. In real-world usage, I placed the satellite 45 feet (14 meters) from the router, and there were a few thin walls and other household objects in between them — it was highly likely that the mesh didn’t use the 6GHz as backhaul anymore.

Via such a scenario, which might or might not be comparable to your situation, the screenshot below shows the best possible Internet speeds out of the two.

I tested that using a Pixel 6 — which, in my experience, was capable of over 1200Mbps of sustained Wi-Fi speeds — via a 10Gbps Fiber-optic connection. In case you’re curious, here’s the speed test page I used for this testing.

I did this test randomly many times over a week, using all different bands, and picked the best result for each case to show here. Hint: Your experience will be different, likely slower, especially at the router’s end.

So, if you don’t care about getting the most out of a Gigabit-class broadband connection, as you probably shouldn’t since anything over 100Mbps is enough for any applications, the Deco XE75’s real-world speeds sure will suffice. If you want more, getting your home wired is a must and maybe consider the Asus ZenWiFi Pro ET12.

Clearly, in a wireless setup, we must balance range and performance. I’d say this 2-pack can handle around 4000 ft2 with decent speed. Larger than that, you will need to use a network cable to connect the two units or be content with using the 2.4GHz as backhaul, which is very slow. In any case, your mileage will vary depending on the layout of your home.

Before publishing this review, I used the Deco Xe75 for over two weeks, and it proved reliable. We had no issue with disconnections. 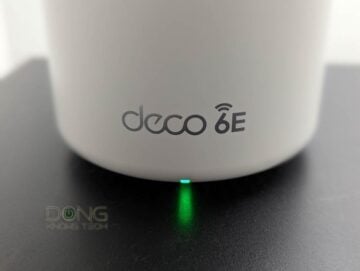 Only three network ports on each unit

To put in a sentence, the Deco XE75 is an affordable Wi-Fi 6E system that gets the job done with minimum effort as long as you’re OK with managing your network TP-Link’s way.

Considering the friendly retail price of $300, the 2-pack TP-Link Deco XE75 AXE5400 Tri-Band Mesh Wi-Fi 6E System is excellent. It’s proof that the eero Pro 6E, which has much worse hardware yet costs double the price, is a total ripoff.

This new system will deliver for those wanting a reliable wireless mesh for their modest network. And if you have wired your home, you can expect consistent Gigabit-class sustained speeds.

On the downside, the lack of a real, local web interface can translate into privacy risks. Also, the lackluster feature set, even when you want to spend another $6/month for the subscription add-ons, can be a deal-breaker for advanced users.

All things considered, I’d recommend the Deco XE75 with a tad of reservation. In a way, it’s a testament to the fact we can’t have everything, and sometimes, not even close to that. But even then, we might still end up with a good deal. 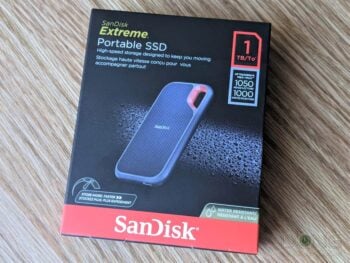 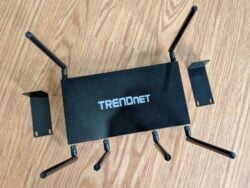 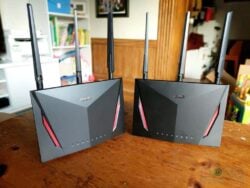