If you followed my reviews on the latest Linksys Wi-Fi 6/E routers — including the MX5 Velop AX, the MR9600, the MR7500, or the Atlas Max 6E — you’d note how I lamented the fact, among other things, you might think you must use the Linksys mobile app for the setup process, instead of the web interface.

(As it turned out, there’s a way to forgo this app and get the Wi-Fi broadcasters up and running using just the web user interface. You’ll find out how to do that in the lower part of this post.)

There’s been a trend in home networking that forces or coerces users into signing up for a login account with the vendor and associating their home network with it.

This practice all started years ago with the eero. Nowadays, you’ll find this type of practice common in many vendors, such as Linksys, Netgear, or TP-Link. Each has app-and-login-account coercion at different levels and specific tricks for that objective.

In my opinion, this is a terrible approach that, among other things, causes privacy and security issues — you practically put your home network on the hand and at the mercy of the vendor.

Let’s find out the differences between using the good old web user interface and the mobile app.

Dong’s note: I first published this piece on August 8, 2020, and last updated it on May 29, 2021, with additional relevant information. 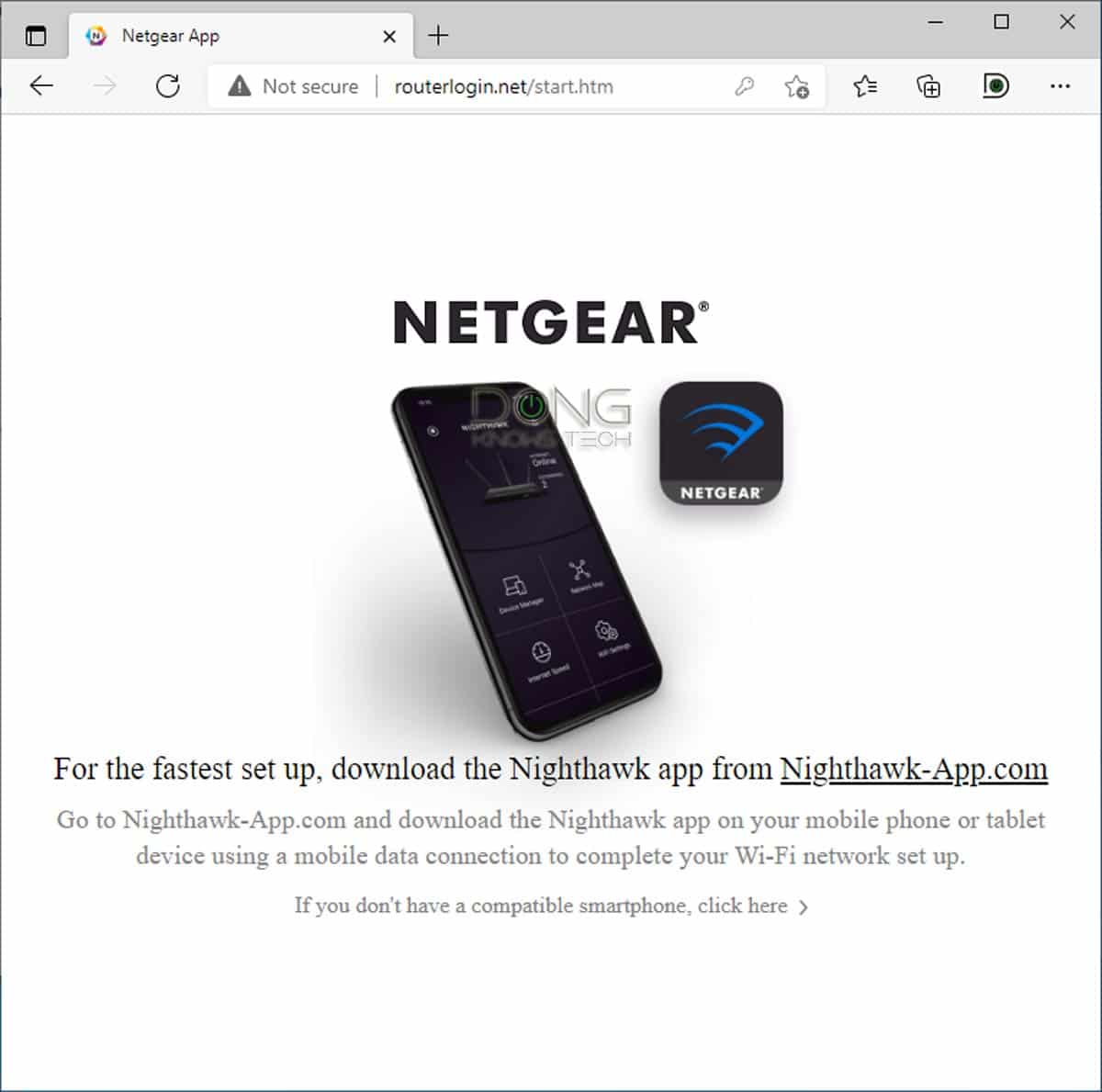 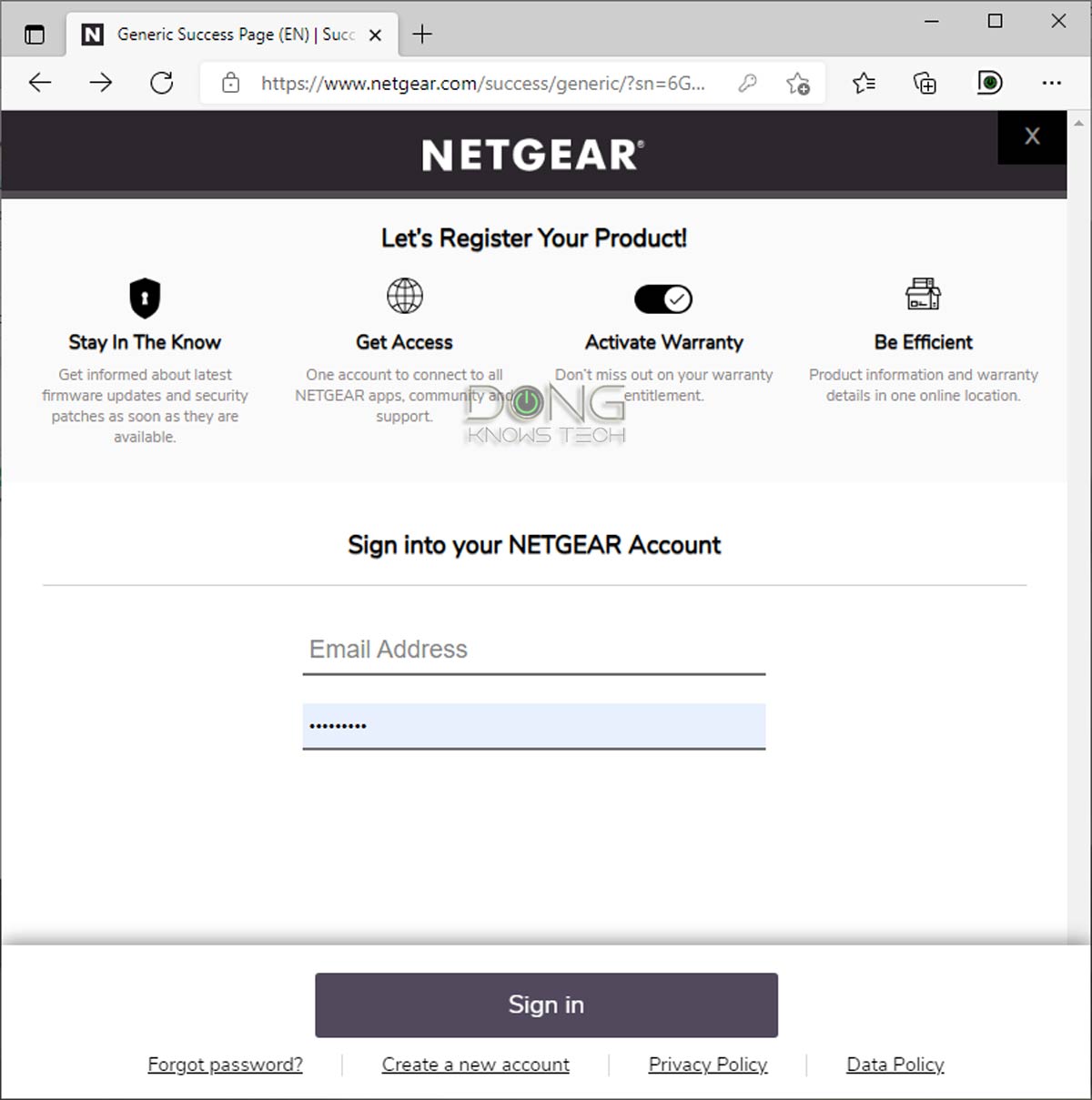 Here's Netgear's effort to steer users away from the web interface and lure them into getting a login account.

In managing your home network, you generally have two options: A mobile app and a web graphic user interface (GUI) — or a web interface for short. Some routers make you choose one or the other. Others give you both.

For ages, the web interface has been the standard way to control home routers. As the name suggests, it’s a web page that you use a browser, such as Google Chrome, Microsoft Edge, or Mozilla Firefox, to access.

By default, the web UI is for local access. You can manage your router, hence your home network, when you’re at home. It’s just like how you use your existing home, like your bathroom, bedroom, kitchen, etc. In other words, it’s real.

If you’re sophisticated enough, you can set up remote access via Dynamic DNS, and now you can watch your home and manage certain things from afar. It’s slightly less real but still within your control. For the most part, there are just you and your home router involved.

So the local web interface is good. It’s about you.

While the look and feel of the web interface can be intimidating at first, using this old-school method to manage your router has a lot of advantages, including:

In short, using the web interface means you own your home network, the router is yours, you can do whatever you want with it without going through another party.

Using a mobile app to manage around is a new trendy option, starting with the boom of smartphones and tablets.

Due to the pressure of a new generation of users who generally lack patience and don’t bother with a real computer, most networking vendors have made a mobile app for their routers an alternative (or supplemental) option to the web interface.

The app is supposed to bring ease of use to end-users, and it might deliver that in certain routers. The Asus Router app, for example, works just like the web interface. It does not require a login account with Asus to work.

So the app itself is not inherently wrong. Instead, it’s the intention behind the app that can be problematic. That’s especially true when a vendor attempt to turn you into a product via the app.

Mobile app: It’s all about your data

Have you ever wondered how exactly the app on your phone is linked to the router at home? There’s no magic. You likely pay for that with your personal information.

The mining of personal information is so lucrative that many vendors — such as Google (the maker of Google Nest Wi-Fi) or Amazon (the owner of the eero) — have gone as far as taking the web interface entirely out of their home networking devices and make the app the only option. Others try to coerce users into the app (or a login account) artificially.

Read this  eero Pro 6 vs eero 6: How to Get the Most out of Your Amazon Wi-Fi

So I have a lot of issues with using the app for router setup and management.

So using a mobile app via a login account means you don’t truly own your network. Instead, you have to ask for another party’s “permission” or at least notify it before making changes to the hardware.

This situation is like asking a plumber for permission or notifying him each time you use your bathroom. The plumber, by the way, has full access to your bathroom and, among other things, would know your bathroom-related activities and habits.

(And would you believe him if he told you that he’d only look at the pipes and record the faucets’ activities and nothing else?)

On top of that, there are also security risks. That’s because the vendor itself can be hacked, and when that happens, you have no idea who gets a hold of the data collected from your home network and what they’re going to do with it.

That has happened and will happen again.

Above is a screenshot of a message Ubiquiti sent to its user in early 2021. If you had used one of its AmpliFi routers, such as the AmpliFi HD or the Alien, your account was at risk at one point.

And that brings us to the next part, where I’ll show you how to avoid having to use a login account or the mobile app with Linksys’s new Wi-Fi routers or mesh systems.

(You can do similarly with Netgear’s or TP-Link’s devices, which are generally more self-explanatory. Their local web interfaces are also less deliberately neutered or obscured. The point is the case of Linksys is a bit too much, worthy of being singled out in this post.)

All Linksys Wi-Fi 6 and Wi-Fi 6E routers/mesh systems have the traditional web UI and the Linksys mobile app. But the networking vendor makes it look as though you must use the mobile app (and all that implies) to set up and use the device at all.

On top of that, by default, Linksys also deliberately removes advanced settings from the web interface to make it similar to the mobile app in terms of access and functionality, as if the company wanted to make you believe that there are no benefits in using the Web GUI.

You’ll learn here how to avoid the login account and mobile app entirely and bring some advanced settings back to the web interface.

The information provided here is no secret, but it’s something Linksys sure wants to obscure from general home users. Also, this might change in the future. It’s all in the hands of Linksys.

Following are the steps to use a Linksys router’s local web interface for the initial setup process. Again, you won’t need your phone, nor do you need to use the Linksys mobile app.

All you need is a computer with a web browser — all computers have one. Then follow these steps.

Flip the router up and take a look at its default information on the underside. This info includes the Wi-Fi name and password. There’s also a Recovery Key (or PIN) — make a note of it.

Connect a computer to the router using the default Wi-Fi information mentioned above or a network cable.

Now access its web user interface by pointing a browser to the router’s default IP address, which (almost always) is 192.168.1.1 — enter that on the browser as a web address. (Don’t know what a router’s IP is? Find out more in this post about IP addresses.)

A webpage will open, as you can see in the screenshot below.

Ignore the message about downloading the mobile app. Instead, click on the picture of the app on the left. (Note that your mouse cursor’s shape will not change when you hover on the image to suggest the image is clickable, but it is.) A new page will open up, as seen in the next step.

The new page will show the traditional login page of the router. Enter the default password, which is admin.

And that’s it. Now you can log in to the router’s local web interface, where you can change the settings the standard way.

Once you’ve successfully logged into the web interface, there’s just one more thing to do to make sure you can access the router’s advanced settings.

Look for the word CA at the bottom of the webpage and click on it. (CA stands for consumer advocacy, by the way.) Now, the page will reload, and you’ll be able to access all possible router settings.

Here are a few screenshots of some advanced settings you’ll find.

Using this trick, you’ll be able to set up and use your new Wi-Fi solution, be it a single router or a mesh system, without giving Linksys any personal information. If you want remote management, you can use Dynamic DNS.

Unfortunately, even with this trick, the option to backup the router’s settings to a file and restore it later or on a different hardware unit is still missing. Linksys told me that it would consider bringing that backup via a future firmware update. We’ll have to wait and see. I’d not bet on that, though.

I’m a fan of owning a product outright. You pay for a router, and you should have the option to use it however you want. It’s yours, after all. App-based devices, to some extent, make the vendor the actual owner of your device or even your network.

Also, networking is a complicated category. The deeper access and more control you have over your router, the better chance you’d get the most out of it. The Web GUI generally gives you that. On the other hand, mobile apps tend to dumb things down. Consequently, using the app can turn you clueless about certain essential aspects.

Finally, note that even when you opt for the web interface, there are routers (from Netgear, or TP-Link, Linksys, and more) that still ask you to sign up for a login account and link your home network to it. In this case, you’re not better off, privacy-wise, compared to using an app.

The point is this: Avoid using a login account when you can. Sometimes that’s as simple as paying a bit of attention during the initial setup process.

47 thoughts on “Router Management: Web Interface vs App and the Trend Linksys Typifies”

Dong Knows Tech earns Amazon affiliate commissions from qualifying purchases. You can support the site directly via Ko-fis ☕ or Venmo @DongKnows. Thank you!